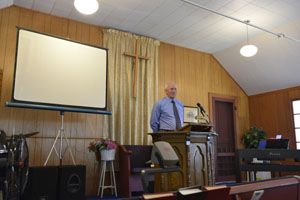 The theme today was Failure Need Not Be Final.
We all have failings from time to time, things we do that cause us to feel somewhat disconnected with God. The story in 2nd Samuel about David, King of ancient Israel, writer of so many glorious psalms of joy and praise, and slayer of Goliath, gives us hope in such times of disconnect.
The story relates David’s failings in not fulfilling his duty as king to engage himself in battle, not fleeing from temptation of the flesh but committing adultery, not taking God’s law seriously and intentionally scheming to deceive others of his being complicit in murder . David lost his sense of personal peace and joy and usefulness.
But we see in psalm 51 the evidence that he acknowledged his transgressions to God, admitted his failings, and took ownership of them. Cleansing follows admission. The promise and grace of God goes far beyond the depth of our depravity. God cleansed David’s heart and changed him into a man of God; joy and peace and usefulness returned to David’s life.
This biblical story gives us hope that we too will be cleansed by God through the recognition and admission of our transgressions., and we too can return to a sharing in God’s glory.